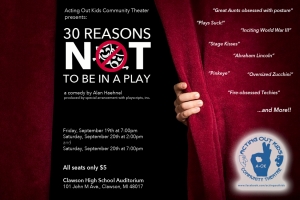 Our debut production of 30 REASONS NOT TO BE IN A PLAY was a huge success! The kids did an amazing job and we are so proud of all of them. Thanks to all of the kids for all their hard work and for doing an incredible job. A special thanks to the parents that graciously helped out. It is very much appreciated!

For our very first production, the Acting Out Kids Community Theater will be doing “30 Reasons Not To Be in a Play.”

Holding hands, pinkeye and inciting World War III – these are only a few of the many things that can go wrong during the production of a play.  This is 90 minutes of hilarious horrors and hardships that befall those who feel the call of the stage.   In a series of funny examples, this play proves that drama can be a very dangerous thing and it must be avoided at all costs!

This fast-paced comedy is a series of skits with lots of great roles for a lot of kids. While the intent will be to put on a great show, the purpose of all of this is to have a lot fun, make friends and even learn a few things.

If you want to check out a sample of the play go to https://www.playscripts.com/play/1171 and click on ‘Free Sample’ on the right hand side.

Since we like to support other theatre groups, please let us know if you’re in another production.  We won’t consider this a conflict, unless it is during the final week of our production.

First Rehearsal – A Great Time Was Had By All!

Everyone had a great time getting to know each other!

Rehearsing for our big show…  The kids are working hard!